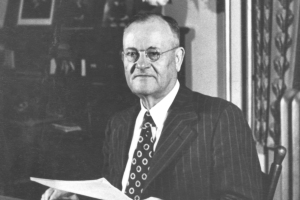 A Farewell from Mr. Walker

Below is a farewell message from Mr. J. Carter Walker to the members of the Class of 1948. It was printed on June 4th, 1948 for Woodberry’s 59th Commencement. This was Mr. Walker’s last year as Headmaster, the end of a legendary 50-year tenure. In the year prior, his […]

Reprinted from the February 17, 1978 Oracle Written by John Phelps Every year about this time an article entitled “Senior Slide” (or some variation thereof) emerges in the pages of The Oracle. This year I have been endowed with the honors of writing the article. It is fitting […]

Reprinted from February 12, 1971 Oracle Following the tremendous expression of concern born in the Thursday Discussion groups, it appeared that Woodberry’s students were finally motivated to do more than sit back and fill the air with the noise of their complaints. Suddenly, it seemed that people know […]

Half a Century Later… The Game Goes On

Republished with permission of Caldwell Bailey ’01, original written in November 11, 2000 issue of The Oracle Fifty years ago, J. Carter Walker sat down to reflect on Woodberry Forest’s half-century-old rivalry with Episcopal High School. In his mind were all the tests The Game had persevered, and […]