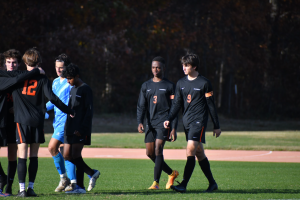 By Mitch Riith ’25 In the first round of the playoffs, momentum was all toward the Tigers. Two early scores from Robbie Handelsman ’23 set the pace early. Rylan Meza ’24 was also a key component vs St. John Paul the Great as he made many impressive saves. […]

By Robbie Handelsman ’23 With banners now flown across campus, and echoes of “Beat EHS” heard within every building and on every brick pathway, The Game is officially here. The oldest rivalry in the south continues this Saturday in Alexandria, Virginia in the Hummel Bowl following the bonfire […]

By Mitch Riith ’25 Standing at number two in the prep league, this experienced Woodberry squad is a force to be reckoned with. Currently at 7-2 and fresh off a 4-1 victory over STAB, it has been a glory season thus far. I recently talked to senior defender […]